THE TRUTH BEHIND ROOF STAINS, WHAT THEY ARE, WHY THEY ARE THERE, AND HOW THEY GOT THERE.

Roof cleaning as an industry is very new. Bursting onto the scene in the late 1980s and early 1990s there have been as many methods for cleaning roofs as the organisms growing on top of them. Initially, roof cleaning was a “garage art” at best. Primarily a phenomenon in the Southern United States, roof cleaning was thought of as a regional service with the hot spot in the state of Florida. Initially, the focus of ridding the roof surface of ugly black streaks was a basic cleaning function. However, these black streaks are truly an infection of organic materials that are better addressed with algaecides such as you would address a fungal infection in your garden. To approach roof staining in this way was different than any other previously taken, and led to a revolution in the roof cleaning industry. 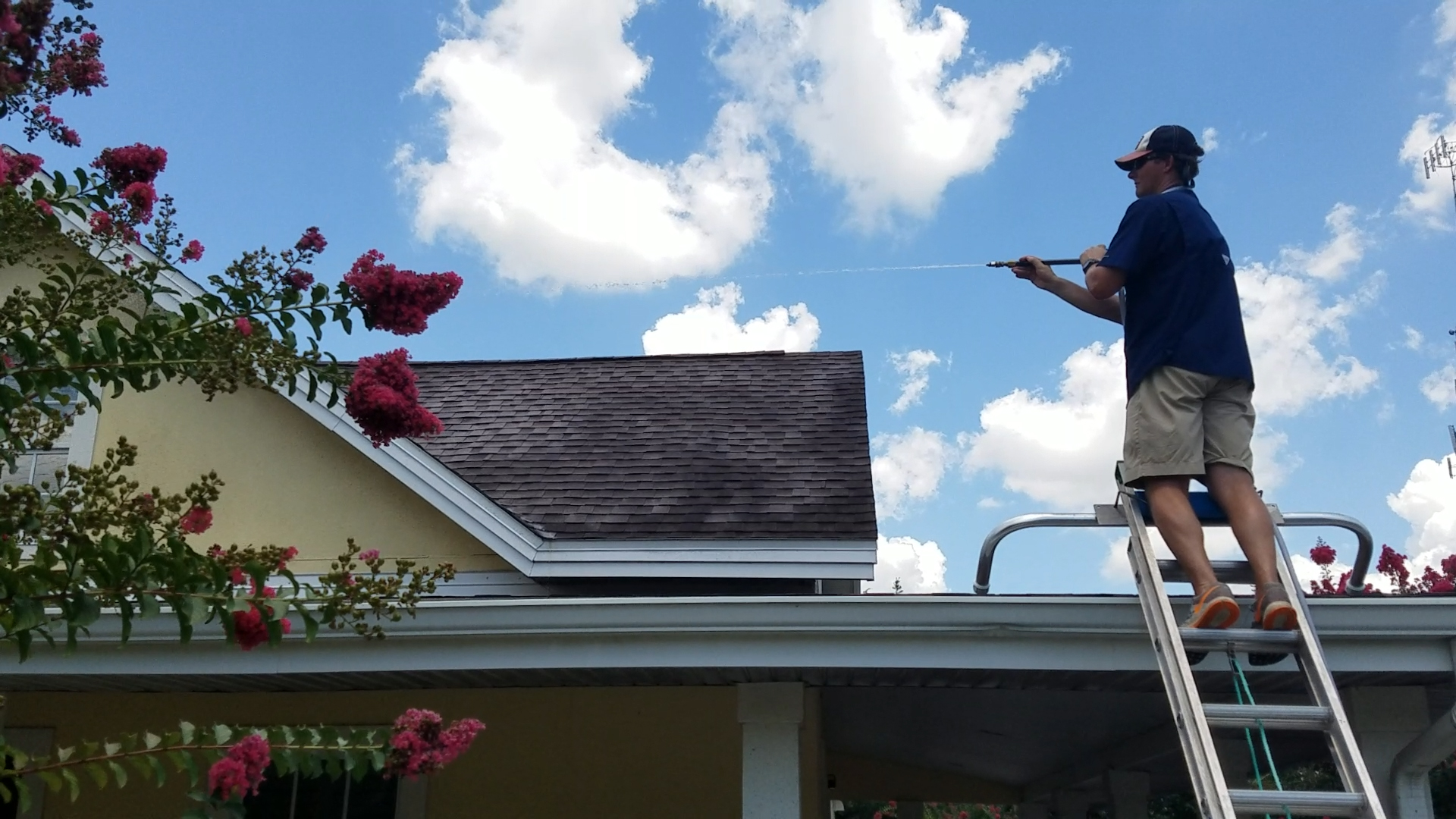 Gloeocapsa Magma is the true culprit that causes black streaks on roofs and surfaces. Other forms of microorganisms can be found in union with the bacteria, including mold, fungi, algae, mildew, lichen, and moss. The main culprit of most roof staining that causes prevalent black streaks is a bacteria called Gloeocapsa Magma. Many of the organisms that grow on a roof, including mildew, algae, bacteria, moss, lichen, and fungi, copulate in the warm, moist environment created by a roof.

Plus, many roofing surfaces are made with materials that can be metabolized by these microorganisms, such as shingles that now contain limestone that algae, mildew, and bacteria will absorb their nutrients and feed off the shingles.

Soft washing is more than cleaning. The products developed for SoftWash systems not only clean stains but also sanitize, penetrate, and eliminate the root of the issue. The main culprit of most roof staining that causes prevalent black streaks is a bacteria called Gloeocapsa Magma. Soft washing has the ability to kill the pest from the root up, achieving a truly clean surface.

Like plants, fungi, and algae that are growing on a roof have root systems that can cause damage to shingles such as uplifting, spreading of shingles, and decomposition. Not to mention other forces are responsible for damaging a roof, such as erosion from nature or other forms of roof cleaning. In the photo, you can see an Asian temple being overtaken by a tree. Due to the filament root system of fungi and algae, they are growing on and digging into your roof much like this tree.

These microorganisms, such as fungi and algae, will break down a surface and cause decomposition. This, in turn, will also aid the process of erosion caused by running water either from nature. A massive example of the power of erosion is the Grand Canyon. Water can be a true force of erosion in nature.

If you look at a picture of swollen, poorly maintained shingles you can clearly see four forces working away at them. There is no question that the shingles are being attacked. Let us break down the four areas of shingle deterioration caused by algae and fungi:

1. Shingles break down from decomposition caused by algae and fungal filament root systems. In the picture below, you can see how the shingles have cracks in them, thus curling and swelling.

2. Shingles break down because algae and fungi have a hunger for limestone fillers. Limestone, which contains phosphates, is an excellent source of nutrients for algae and fungi.

3. Shingles break down from the waste created by the algae and fungi metabolizing the limestone fillers. This waste is acidic and damages the shingles.

4. Shingles break down because of the excess heat caused by the darkening of the shingles. The darker the shingles get from algae streaking, the more heat they absorb. This excess heat dries the shingles and ages the petroleum in them.